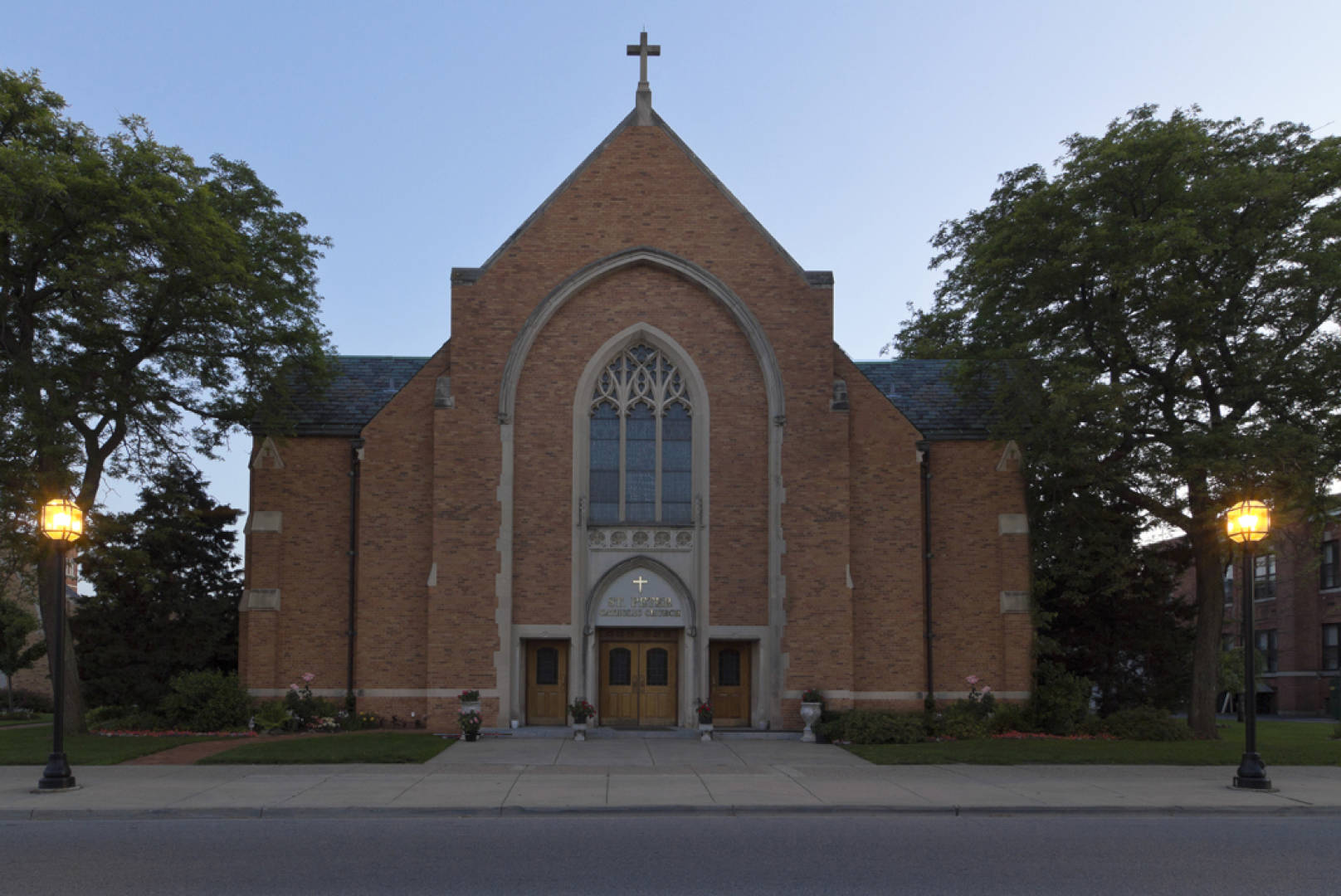 Fire and water played a prominent role in the early history of St. Peter Parish at Mount Clemens.  In the year 1805, the town of Detroit was nearly destroyed by flames.  This catastrophe drove untold numbers of Detroiters into the lake shore regions to the northeast.  More than few of them settled at the mouth of the Clinton River, which at that time was called the Huron.  A glance at their names reveals that the Catholic faith had a large representation among these early settlers.  Their pastor was none other than the famous Fr. Gabriel Richard.  This zealous apostle established a mission at L’Anse Creuse Bay on a plot of ground fringing Lake St. Clair and situated on the Ratell farm named St. Felicitas.  Today that whole site is under water. An interesting though tragic tradition explains the watery grave in which lie the ruins of this first church of Macomb County.  On one occasion when Fr. Richard was struck with the indifference and coldness of his people, he warned them to reform lest the very church in which they worshipped be swept away by the waters and the very land on which it stood be hidden from their sight.  The priest’s prediction came true when, some thirty-six years later, the waters of the Great Lakes went through a high water cycle, burying St. Felicitas, its cemetery and the town of Belvedere in water.

Fr. Richard was the only priest in Michigan for many years.  Sick calls came to him from as far as Monroe and Port Huron.  His parish included all of the city of Detroit and the territory intervening between the Ecorse and St. Clair Rivers.  In the midst of his manifold labors in this area he found time in the year 1800 to erect a little log cabin church called the “Petite Chapelle” on the Moor farm on the south bank of the Clinton River.  As the young community grew, additional priests arrived to minister to the people.  Among them were Rev. Stephen Bodin (the first priest ordained within the limits of the original thirteen states), Rev. Vincent Bodin, Rev. f. Boehm and Rev. Philip Janviers.

When Fr. Richard was elected as the first delegate from Michigan to the Congress of the United States in 1823, the Rev. Philip DeJean became the new pastor.  By this time, the number of Catholics had so increased that the “Little Chapel” could no longer accommodate the worshipers.  Accordingly, Fr. DeJean began to search for a suitable location for a new church, finally deciding to build on the north side of the river at a distance of about three miles from the present City of Mount Clemens.  The land upon which the church was built was donated by Ignatius Moross and the edifice was dedicated to St. Francis de Sales.  Little information is given concerning the affairs of this parish under the direction of Fr. DeJean.

In 1839, Christian Clemens, the founder of Mount Clemens, plotted out a new section of the village.  To encourage the sale of lots in this district, Clemens donated a square of land to each religious denomination and specified that the donation was to be used for religious purposes.  These lots were all in close proximity to one another.  This explains the large number of churches found near New Street today.

At the time of this donation the Catholic population of the village had rapidly increased, partly because of the many new industries which had sprung up and partly because of the proposed work on the Clinton and Kalamazoo Canal.  This latter project was ill-fated but is responsible for a large influx of Irish settlers into the area who remained even after the enterprise failed.  A delegation of thirteen men approached Bishop Lefevere of the Diocese of Detroit and received permission to build a church on the land.  The deed was finally registered on September 15, 1841, and St. Peter Church was established on New Street.  Bishop Lefevere assigned the first resident priest, Rev. J. Kenny, in 1843.  Fr. Kenny built the front part of a respectable wooden structure and crowned it with a steeple.

Frail health forced Fr. Kenny to retire in 1845, and he was replaced by the Rev. Father Maret, better known under the title L’Abbe Maret.  Although reputed as an orator in the French language, Fr. Maret never mastered English and found it difficult to grow accustomed to the ways of the New World.  After a brief pastorate, he replaced in 1846 by the Rev. Henry Van Renterghem.

During his pastorate, Fr. Van Renterghem merged the two parishes, St. Francis de Sales and St. Peter, into one church in the village.  Naturally, the members of St. Francis de Sales were reluctant to relinquish the ties that bound them to the parish.  However, when Bishop Lefevre appeared personally at their Sunday services and announced the decision, they acquiesced.  Realizing that a parish limps without a parochial school, Fr. Van Renterghem established a one-room school with one teacher.

Following Fr. Van Renterghem’s death in 1869, the Rev. Camillus Maes, who later became the third Bishop of Covington, Kentucky, became pastor and built the first “proper” St. Mary School.  In 1870, the school was opened with three Sisters from the Sisters, Servants of the Immaculate Heart of Mary (IHM) in Monroe, MI.  It is rumored that the Sisters had only one condition, that our Blessed Mother Mary be in the name of the school – hence St. Mary School.  The school had two rooms, one for boys and one for girls. In 1871, Fr. Maes was called to establish a new parish and was replaced by the Rev. Charles Ryckaert.  Although many were not welcoming and did not think him capable to lead the flock, he proved himself well-qualified.  He managed the building of a magnificent church, a modern school and a spacious rectory.  In 1875, Fr. Ryckaert began and completed the building of a new pastoral residence.  But he could not bear to see the house of God excelled by the priest’s house, and he turned his thoughts to the building of a new church.  In 1882, construction of a new St. Peter Church was begun with the cornerstone being consecrated on Independence Day.  When the church was complete it was described in the Mount Clemens Monitor as “the finest edifice of its size in the state the finest architectural ornament of Mount Clemens, a beautiful structure of stone and brick, built in a most substantial fashion.”  Dedication services took place on November 18, 1883 with Bishop Borgess officiating.

In 1889, the old frame school building was sold for $250.00 and moved to the corner of Macomb and Pine streets and an imposing brick structure was built in its place.  There were three rooms on the first floor and three on the second, and it was classed as one of the finest of its day.  Known as the “Zealous Builder,” a convent was well under way when Fr. Ryckaert was called to his eternal rest in 1892.

In May of 1892, the Rev. J.A. Van Hoomissen became the new pastor.  He completed the projects started by Fr. Ryckaert, and, in 1895, celebrated the first graduating class of St. Mary High School which consisted of seven girls.  Fr. Van Hoomisen’s pastorate is also notable for his devotion to the sick.  He kept a spirited horse in his barn which could carry him to the home of patients in need.  At his request, the Sisters of Charity came to Mount Clemens from Cincinnati in 1899 to establish St. Joseph Sanitarium, the forerunner of the present Henry Ford – Macomb hospital in Clinton Township.

Fr. Van Hoomissen passed away in 1902, and the Rev. Cornelius Kennedy was appointed pastor.  Fr. Kennedy found St. Mary School to be overcrowded and, in 1903, doubled the size of the Grammar school, rearranged and enlarged the auditorium, and installed a new heating system.  In 1911,  the parish broke ground for a new high school building on Market Street.  This marked the beginning of a distinct high school.  The Class of 1912 was the first to graduate from the new high school.

Sadly, Fr. Kennedy passed away in 1912.  He was succeeded by the Rev. John Ryan.  The Rev. Thomas Luby was appointed pastor in 1918.  Fr. Luby erected the statue of St. Joan of Arc, located on New Street, in honor of the parishioners who served in World War I.  In 1921, an addition was started on the new high school.  The Rev. Dennis Hayes replaced Fr. Luby in 1926.  Fr. Hayes and his assistant spent much of their time teaching in the high school.  During this time, the parish also purchased Cairns Field, named after Rev. George Cairns.  This addition was welcomed at a time when the Public High School Stadium was not yet open to Catholic teams.

The year 1934 saw the transfer of Fr. Hayes to Marine City and the installation of the Reverend Alfred Hebert as pastor.  As a result of the Great Depression, the parish was in deep financial debt, and it was Fr. Hebert’s goal to pay off the debt and return the parish to solid financial ground.  The parish reached its goal in 1941 and, as a result, redecorated the inside of the church with color and added lights.  The Rev. Leo Roberge arrived in 1942.   In 1944, upon Fr. Roberge’s passing, the Rev. Paul Heenan became pastor. On September 11, 1957, fire played another part in the history of St. Peter Parish.  At 10:45 AM, the first flames were spotted and the alarm sounded.  Within an hour, the church stood in charred ruins.  Only the heroic efforts of the firemen of Mount Clemens, Harrison Township, Selfridge Air Force Base, Roseville, Chesterfield and Clinton Townships saved the other buildings.  The parish now faced a new challenge – to rebuild the church.  Under Fr. Heenan’s guidance, that challenge was met and the “new” church was dedicated on December 20, 1960. Fr. Heenan was replaced by the Rev. Michael Koultuniak in 1966.  St. Mary High School was struggling financially and closed in June 1970.  June 1970 also saw the arrival of the Rev. Vincent Welch as pastor.  Under his leadership, a new convent was built and the old convent became the administration building.  Fr. Welch was also instrumental in establishing Cardinal Mooney High School.  In 1984, the Perpetual Adoration of the Blessed Sacrament started at St. Peter’s and continues today.  After Fr. Welch’s death in October 1987, the Rev. Joseph Femminineo was named administrator and, subsequently, pastor.

Fr. Femminineo found the parish once again in debt and the former convent and rectory in irreparable condition.  In 1988, the Sisters living in the new convent were informed the parish needed the building.  Many of the Sisters retired to the motherhouse in Monroe, ending 118 years of service to the parish and St. Mary School.  On July 5, 1989, the convent became the rectory and administration building.  Fr. Femminineo started to reduce the parish debt, renovated the Perpetual Adoration Chapel and tore down the old convent and rectory. On August 1, 1990, the Rev. Michael N. Cooney became the pastor.  Under Fr. Cooney’s leadership, the parish has seen many changes.  He paid off the parish debt, tore down old garages and built a new one.  Many upgrades to the school and church have been made.  The Fr. Welch Parish hall was built, and a primary school was purchased. At the cemetery, a columbarium was built in 2005 and a chapel was built with restrooms added in 2006.  The office building at 110 New Street was purchased in 2008 and became the new administration building.  St. Peter Parish has become a stewardship parish and, as a result, has continued to grow and upgrade its infrastructure.  The St. Vincent de Paul Society has been endowed so that they may continue to serve the less fortunate in the community for many years.  After two years of negotiating, the parish purchased the former Alexander Macomb School from Mount Clemens Community Schools.  The new St. Mary School was dedicated in September 2013.